Eknath Solkar, a forward short leg fielder in Indian cricket 30 years back in the 1970s is no more. With his poor educational qualification, he raised himself to a level as a player in Indian cricket team. He was one of the rare cricketers who took delight in being a fielder to chase and catch cricket balls. Bishen singh Bedi says " We would not have been the same bowlers without EKNATH SOLKAR. "It's an irony that he was a day drunkard even before he was dropped from the national team. By the time he breathed his last, Solkar weighed just 45 kgs and reduced to being a merebag of bones.

When this year began, in January, the glamour qeeen of the 1970's Parveen Babi's body was found in a Mumbai Martuary with a token as an unclaimed body No.16


EVERY ACTION HAS A REACTION!

Vinod mehta wrote this in OUTLOOK june 20,2005.
I was appalled to read this peculiar news. let me give the message briefly.
Tony Blair,British Prime minister, a father of four grown-up kids declared in an interview " I am still SEXUALLY ACTIVE. I am a FIVE-TIMES-A-NIGHT MAN "
Miserably,One month after this interview,it was a pity to note, POMPOUS TONY BLAIR was admitted in hospital with a SEVERELY STRAINED BACK!!!

EVERY DELIBERATE, INTENTIONAL ACTION IS HAVING A REACTION.
YOU MUST REAP WHAT YOU HAVE SOWN.

WHO LOSES, WHO WINS. WHO IS IN WHO IS OUT

An ardent follower of Khomeini, AHMADINEJAD, The newly elected President of Iran had done a leading role in the occupation of the American Embassy in Tehran in the year 1979. This incident was the major cause of President Jimmy Carter's defeat by Ronald Reagan. It is obviously revealed that Reagan's employee had influenced the rebels against King Shah, not to free the embassy hostages until the election and as the protagonist of that operation, Ahmedinejad is reprehensible for the change in the American Presidential Order.
Now it is learnt, U.S is not pleased with the victory of Ahmedinejad. Was he a real King maker or not?

Who loses, who wins
Who is in and who is out.

ASHOKAMITRAN'S LETTER WRITTEN TO R.P.RAJANAYAHEM -
A REJOINDER TO OUTLOOK POLEMICS

When Ashokamitran wrote me a letter and wanted me to type it and arrange to publish it in pathivukal.com, I thought of giving a resounding,booming TITLE to that historical letter and chose a sentence from the letter itself because "NOT A WORD IS WRITTEN BY THE INTERVIEWEE!" sounds a decree and verdict in it and this line has an assertive forceful claim and while pronouncing, it becomes an articulate, expressive declaration.

Now when I find this TITLE has become popular in Raayar Kaapiklub I feel great.

But this letter also raised a row among the libertarian writers(!) around Tamil nadu. Why should Ashokamitran write this letter to R.P.RAJANAYAHEM ?
That's the question !

Heated discussions going on and now
ASHOKAMITRAN'S LETTER TO R.P.RAJANAYAHEM IS AT ODDS !
So this letter is being rejcted and ignored.

"How many ages hence
Shall this our'LOFTY SCENE'be acted over
In States unborn and accents yet unknown!"
- Shakespeare in Julius Caesar 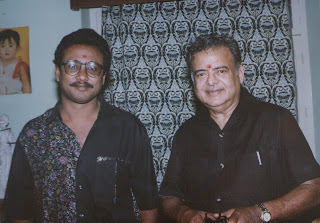 CHARU NIVEDITA'S O DEGREE IS NOT A PULP FICTION.

A rejoinder to Time of India
Dear Shalini,

Madam, 0 degree is an alchemical novel from the beginning to end and is considered to be one of the greatest works of Literature.Every step of this novel shows much poetic qualities and I call 0 degree 'FROZEN MUSIC'.
It is very sad as Emerson says " To be great is to be misunderstood". I should agree that there is an optical illusion about every great masterpiece we read. Infact Charu Nivedita has created a microcosm of life,successfully preserving its complexity,its tension,liveliness and dynamism.He wrote this novel a century early and 0 degree is one of the landmark publications in the history of Literature.

I would like to bring to your kind notice Paul Zakaria's foreword to the Malayalam translation of 0 degree
" 0 degree is like an open experimental laboratory.Amidst the smoke, noxious vapours and beautiful imagery, high experienced and a wondrous journey."

Please note this remarkable and notable novel is placed now for four years in the syllabus for PG course students in Kottayam Mahatma Gandhi University.

When this novel was first published in Tamil ten years back, there was a hue and cry to ban this book. But it is the height of irony that the rulers and intelligentsia are insensitive and incapable of either appreciating or banning this work of art.

More over as there is a torture scene in which National Anthem is used in a police station,the so called national patriots are making hallabaloo and are against this remarkable novel even now.

I humbly request you not to disillusion the literary significance of 0 degree,extremely contraversial in both its subject matter and its use of often 'OBSCENE' language.

HERE IS THE RUB!